On April 18, 1918, a meeting was held at the home of Joseph Urban of Earleigh Heights for the purpose of establishing a Volunteer Fire Department.

Ninety years later, the Earleigh Heights Volunteer Fire Company presents a much different appearance. Housed in a modern station on Ritchie Highway, with a total membership of 154 of which 75 members actively operate the company's day to day operation.

Such growth has not been automatic and some of the many accomplishments bear repeating here.

The first fire truck was purchased in 1919 for $75.00. Primarily a cart to haul the equipment on, this piece was fitted out with ladders, rope, axes, buckets and lanterns. It could be either man or horse drawn. The first fire station was also built at this time; mounted of skids, it could be moved if need arose.

In 1923 John J. Shiroky was elected the first Chief. April 16tha new Fire Engine was purchased for $498.00. This was a Holloway Chemical Wagon on a "T" Model Ford Chassis, this unit employed soda and acid as an extinguishing agent. In 1923 EHVFC joined the Maryland State Firemen's Association and sent its first delegates to the State Convention. They reported that this company as brought forth prominently upon the floor of the convention.

Acting upon a letter from the Fire Company, the County Commissioners of Anne Arundel County agreed to provide support for the upkeep and purchase of equipment to the amount of $100.00 a year. The first chauffeur was hired; his salary was $80.00 a month.

A plot of ground was purchased from Ben Brodner of Earleigh Heights to erect a larger Fire Station, this was completed in 1930.

A 400 G.P.M. pumper was purchased from American Fire Apparatus, built on a Diamond-"T" chassis. This pumper embodied many new innovations in engine design and "The Little Diamond-"T" became literally an institution in fire fighting in Anne Arundel County. This engine answered fire calls until 1967.

On October 3, 1945 a new Ford ambulance was purchased and an addition to the station was added to house it. The week of August 20, 1945, marked the first carnival held on Mr. Rennie's lot on Ritchie Highway and Earleigh Heights Road.

A second Diamond-"T" Pumper with a 500 G.P.M. pump was added and soon named "The Big Diamond-"T". This unit carried 800 gallons of water. Again the Station had to be enlarged to house equipment.

The first mobile radios were installed in all equipment, along with a base station and the never forgotten call letters "KGB466". The year also saw the first dedicated Emergency Telephone installed for reporting emergency calls, Severna Park 50.

Four acres of land was purchased from Mr. Rennie on the site where our Carnivals were being held, on the corner of Ritchie Highway and Earleigh Heights Road. The purchase price was $6,000.00. This investment was made for future progress of the Company.

March 2, 1957, ground was broken on the fore-mentioned property for the present Fire Station. Members performed much of the labor involved in building the station which included a hall with a 600 person capacity for fund raising events. These today include: weekly Bingo, Bull & Oyster Roasts, Dances and our Annual Carnival. Rescue service was instituted on August 7, 1957, as we placed a new Civil Defense Rescue Truck in service.

January 25thand 26th, 1958 was a date of great pride for the members of the Company. This was the weekend that we occupied our new station, which was an important step forward for our Company and Community. Dedication ceremonies were held on April 12, 1958.

A new 750 G.P.M. Mack CF pumper was added to our fleet. This was the first so-called modern look in fire equipment.

Saw the first career Emergency Medical Technicians assigned to our company on a 24-hour basis to bolster our volunteer ambulance service. This was expanded several years later to Paramedic Service.

The Earleigh Heights Volunteer Fire Company is an independent public-supported corporation. As such we have a corporate structure and are governed by an elected slate of officers and a board of directors. We are at the same time a part of the Anne Arundel County Fire Department and are designated station #12. We receive an annual grant-in-aid from the county budget. The majority of capital resources are however derived from company fund-raising. This includes our annual carnival, bull roasts, bingo and our annual fund drive. All of this revenue is utilized directly to improve our services to the community.

Our membership consists of 154 men/women as well as an active ladies auxiliary consisting of 25 members. Members are active on either the administrative side or the operational (fire/rescue) end of the company. Additionally our personnel needs are supplemented by 18 career firefighters and paramedics who are employees of the Anne Arundel County Fire Department. Our station is staffed 24 hours a day by a combination of career/volunteer personnel who work together to assist you and your family in times of emergency. Additionally we provide other community services such as building/hydrant inspections, community events participation, and handle routine service calls such as flooded basements, smoke detector inspections and alarm system malfunctions.

   Photo of the Day 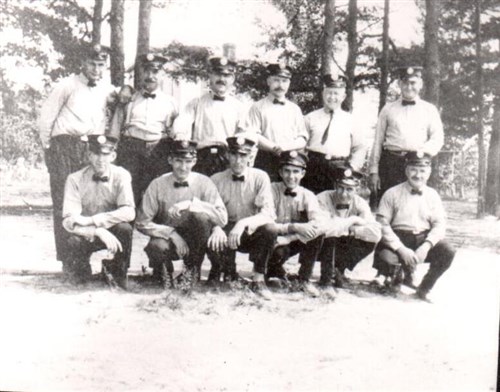